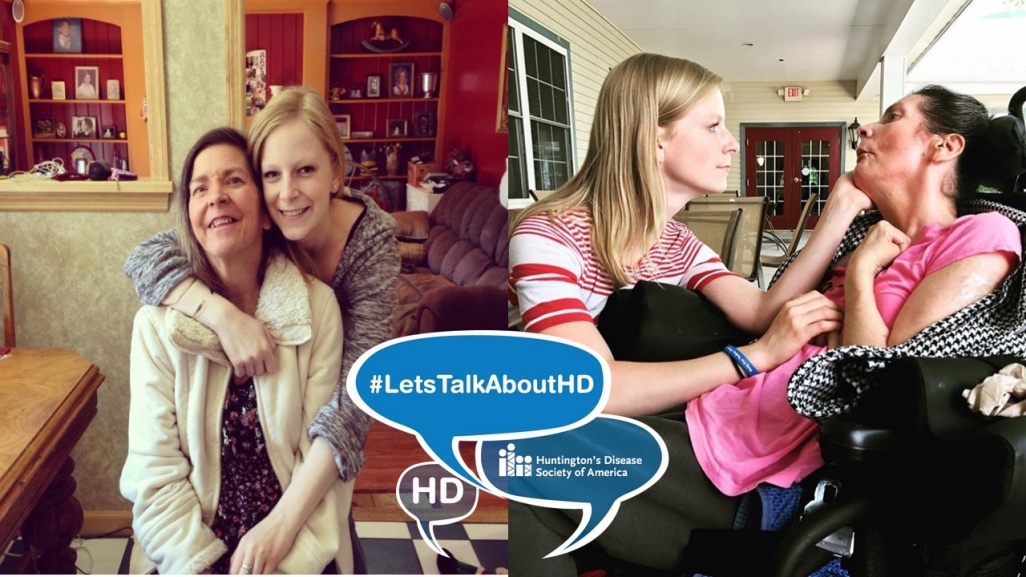 Gabrielle grew up in Albany, New York and stayed home for college. She went to SUNY Albany in New York and had a job waiting tables. She was like any other college student and would go unwind with her friends.

However, she was not like other college students. She would drive an hour away from home to visit her mother in a nursing home. Her mother was battling Huntington’s disease (HD). This is a fatal genetic disorder that causes the progressive breakdown of nerve cells in the brain. It deteriorates a person’s physical and mental abilities during their prime working years and has no cure.

“The disease that seeped its way into my life as early as I can remember, and only got stronger and more prevalent with each passing day,” said Gabrielle. “My mom and two of her sisters inherited HD from their estranged father.”

Gabrielle always remembered her mother being sick as she was not like other moms. She had a lot of anger towards her mother. She was also scared of her aunt because she knew that her mother was going down the same HD path as her Aunt.

“We didn't know when, but we knew it was inevitable,” said Gabrielle. “The obsessions, the mood swings, the depression, the decline of her motor skills, until she is a shell of the beautiful woman she once was. It wasn't her fault but I couldn't understand why she was not able to be there for me in the ways that I needed. In the ways that my friends moms were.”

Gabrielle described most of the symptoms of HD. While most people with HD develop the motor symptoms in their forties and fifties, subtle changes may arise much earlier. The symptoms of Huntington’s disease are described as having ALS, Parkinson’s and Alzheimer’s – simultaneously. To learn more about the symptoms, click here.

Throughout her childhood, it was hard to separate her mother’s harsh words and actions from the person that she truly was. Her patience started to wore thin and she was walking on eggshells at all times in her house.

“It was incredibly confusing for my adolescent brain because my mom, for a long time, was not sick on the outside,” Gabriella explains. “It was only present in her personality which is what made it the hardest to accept that she didn't mean the things she said in anger.”

She was only 13-years-old when her mother had to give up her license due to her motor skills. For the next 5 years, her movements would slowly decline and Gabrielle worried about her mother. However, her mother was very stubborn about asking for help and wanted to be independent. One life incident changed this.

“It wasn't until my mom unexpectedly lost a second sister to a drug overdose that my mom was 100% dependent on us,” Gabrielle explains. “In my opinion, my aunt's overdose was sparked from the guilt of being the only sister of their father to not inherit the disease which is what we in the HD community call survivor’s guilt. Sometimes it's worse than having the disease itself.”

“This was the point in her illness where my mom's body was too tired to fight anymore. Seemingly overnight, she couldn't walk on her own. I was 18 by this point. Waking my mom up in the morning, getting her dressed, brushing her teeth, feeding her handfuls of pills, carrying her to the bathroom, and even bathing her.”

It wasn’t long till her mother would have to go to a nursing home.

“Letting her go to one is still to this day the hardest thing I've ever had to do,” said Gabrielle. “I had invested so much of myself in my mom's health that I didn't know who I was anymore when I was removed from being her caretaker. The anxiety of being her biggest advocate and an hour away from her was a helpless feeling I'll never forget.”

This would allow Gabrielle to fully embrace being a young adult. After years of taking care of her mother, she put some more time in herself. However, she realized that she would never be at peace until she knew her future of the disease.

“It wasn't until my aunt passed away at age 51 that I realized the nature of the beast we were dealing with,” Gabriella explains. “It was at this time that I began worrying everyday about my own future. HD was never spoken about in my family because I don't think anybody could handle more heartache than we were dealing with at that time with my mom and her sisters. I accepted at an early age that the heartache is a never ending cycle when it comes to Huntington's disease, and I was not afraid of being vocal about my concerns for my future.”

She wanted to know her fate. 5-10% of at risk patients choose to get tested. In January of 2015, her questions were answered. After almost a yearlong genetic testing process, Gabrielle tested positive. “I will never have it in me to put it into words the feelings that ensued in me for the following moments of my diagnosis. It was unlike anything I ever dreamed of or imagined it to feel like.”

For the first three years, she dreaded being reminded of the disease. She would always remember the emptiness she felt on that day. Now, four years later, the day is just a distant memory to her.

“Although nothing about my future has changed, what has changed in these four years is my ability to live a full life in spite of what my future may hold,” Gabrielle explains. “In these four years, my voice has become stronger and connecting with people in similar situations as I has made my situation seem much more realistic and possible.”

However, it has not been easy the last four years. She lost her mother and was a big setback for her. “I am here by the love I feel from all angles,” Gabrielle explains. “I am here by the strength I drew from every obstacle that tried to destroy me and easily could have. I am here and I am here to stay and be a voice for those who can't use their own anymore for as long as I possibly can. The fire I feel to be an advocate has never been stronger.”

Currently, Gabrielle now lives in West Chester, Pennsylvania. This October, she will be running the Chicago Marathon. This is an impossible task to finish the race but nothing is impossible for Gabrielle. Nothing compares to losing her mother as she wants to find a cure for this fatal disease.

“Please join me in the fight against HD. We are so close to a cure and it seems plausible that there will be one in my lifetime. But it can't happen without telling my story, spreading awareness, and raising money for research to keep these scientist inspired. As I see it, I can sit around and wait on a cure or I can do whatever humanly possible to be a part of the cure. Being truthful and honest about my diagnosis certainly wasn't the easy route but I chose it because you never know who needs to hear your story. What I can do is choose to end it here- my babies will not have to worry about HD because they will be born through IVF. My hope for a cure will never waiver or be defeated, and you bet if this disease is going to take over someday, it will not be without fighting the good fight, day in and day out.”

The Huntington’s Disease Society of America (HDSA) is the premier nonprofit organization dedicated to improving the lives of everyone affected by HD. From community services and education to advocacy and research, HDSA is the world’s leader in providing help for today and hope for tomorrow for people with HD and their families.

?To learn more about Huntington’s disease and the work of the Huntington’s Disease Society of America, visit www.HDSA.org or call 1(800)345-HDSA.