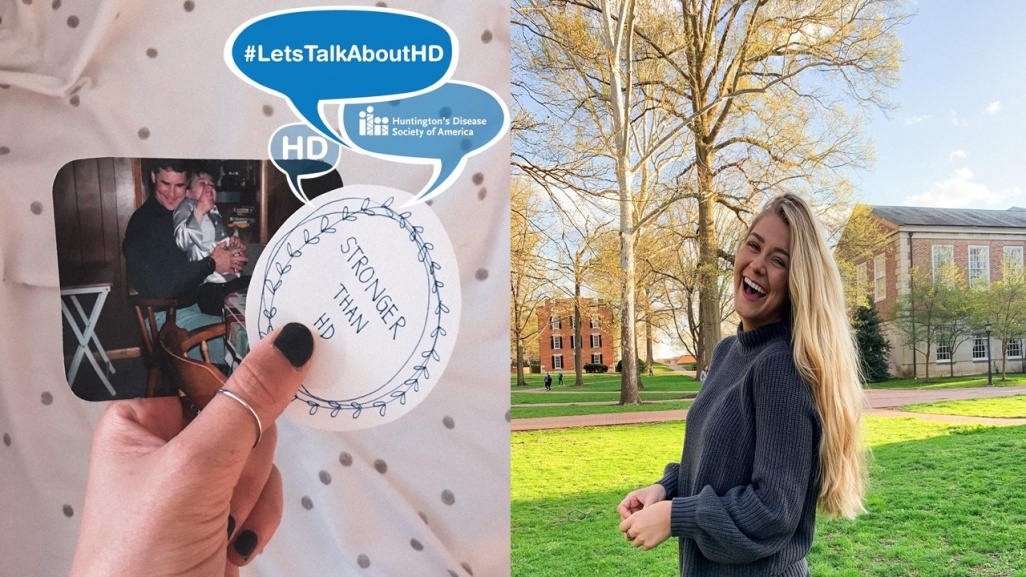 Positivity and Determination. Two words that describe 22 year old Hallie Kile from Anna Maria Island, Florida. She currently goes to Ohio University studying journalism and pre-medicine. She is a senior and getting ready to start the next chapter in her life.

However, Hallie cannot forget her past. When she was nine years old, her father was diagnosed with Huntington’s disease (HD). This is a fatal genetic disorder that causes the progressive breakdown of nerve cells in the brain. It deteriorates a person’s physical and mental abilities during their prime working years and has no cure. Today, there are approximately 30,000 symptomatic Americans and more than 200,000 at-risk of inheriting the disease.

“Ever since I was a little girl, I was convinced that I would find the cure to the disease that took so much from my family,” said Hallie.

In that same year, her sister Jessie passed away but the family never knew if she had the disease as well. Each child of a parent with HD has a 50/50 chance of inheriting the faulty gene that causes Huntington’s disease. Hallie was now the only child in the family.

“Living in an HD family was a unique struggle,” Hallie explains. “For most of my life, my dad was angry. I was scared of him for a long time. As the disease progressed, though, my dad seemed almost to age backwards. He was like Benjamin Button. I lost a sister, but I gained a little brother the sicker he became.”

“Every afternoon when I got home from school, he would wait at the front door to give me a hug,” said Hallie. “Every day, he said the same thing as he stumbled away from his bear hug. Love ya, kid.”

When she was only 16 years old, her father passed away. Before the age of 18 years old, she already lost her sister and now her father.

“Losing my father was the hardest trial I’ve ever faced,” Hallie explains. “Losing him opened my eyes to the power of Huntington’s disease. It took the repeated hugs and I love you’s and the light from father’s eyes. But for everything HD has taken from me, it’s given me so much more.”

Even though the losses were hard and nobody should ever go through that, this would lead to Hallie becoming determined to make a difference. “Huntington’s has given me a sense of determination I could never have otherwise,” said Hallie. “It’s given me an admiration for the individuality of each person I meet, and a sense of awe for their story.”

This would lead her to Nashville, Tennessee. Last year, she was a research intern at Vanderbilt University Medical Center. This is one of the 47 HDSA Centers of Excellence that provide an elite team approach to HD care and research. Professionals have extensive experience working with families affected by HD and work together to provide families the best HD care program.

She described her six weeks there as the hardest and most rewarding time of her life. She praised her experience with Center Director Dr. Daniel Claassen and his staff. “Dr. Claassen gave me the opportunity to interact with HD families and patients while also assisting with the administration of cognitive tests for clinical trials,” said Hallie. “I am forever grateful to Dr. Claassen and his team for welcoming me and for trusting me with the community they hold so dearly.”

Also, during her time in Nashville, she was able to speak at HDSA’s Middle Tennessee Education Day. “The experience was humbling, to say the least. I have never cried so many happy tears in my life,” Hallie explains. “This community has shown me that no matter my genetic fate, I have a purpose. I owe everything to them. Nashville and the Middle Tennessee community will always feel like home to me.”

Hallie continues to stay positive. She has organized the “Stronger than HD” t-shirt fundraiser through her organization called All the Things You Are. She wants people to redefine themselves based on good things rather than what the world tries to convince us we are. She wants people to realize their true potential in life and to stay positive through thick and thin. Through the Stronger than HD fundraiser, I aimed to raise money for Huntington’s disease research while also spreading a message of empowerment,” said Hallie. “My hope through this fundraiser was to remind individuals that they are stronger than any trial they could ever face, whether that be a breakup, a job loss or a genetic disease. No matter your trial, you are stronger.”

Hallie is doing all she can in life because she doesn’t know what her future will hold. Once she test for the HD gene, she will decide to attend medical or PA school. If the test is positive or negative, then it will not change Hallie’s drive in life. She will continue to make a difference in the community and to always live your best life.

“You are so much more resilient than you could ever know. Your story is one worth hearing. You were given this life because no one else could live it but you, and your strength is such a powerful thing. You are a world-changer. Science will call you rare, and that’s exactly what you are. You are rare, beautiful, and strong. Strong enough to live the life you’ve been given.”