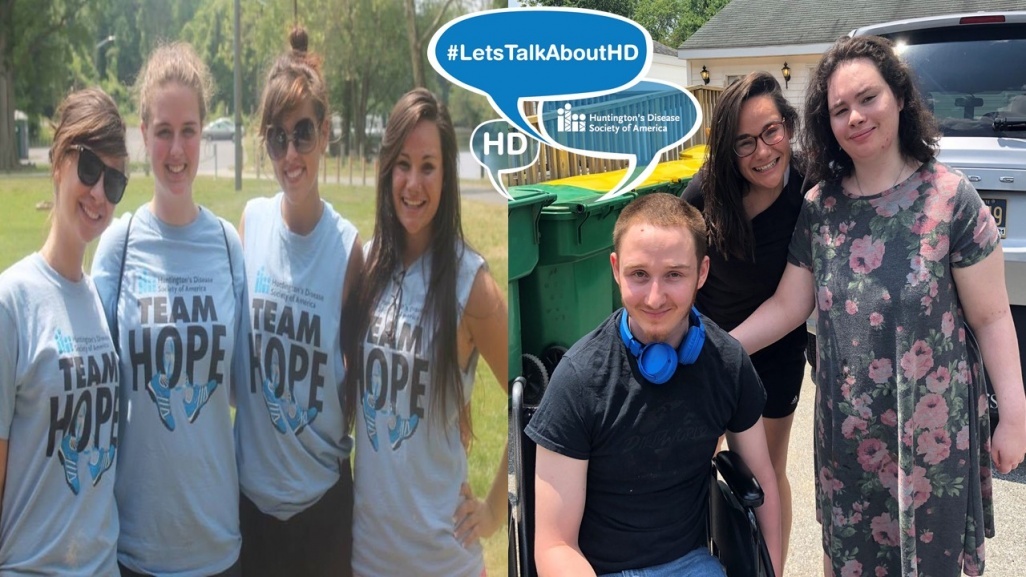 Before moving to New Jersey, she resided in Delaware and had to grow up quickly. When she was younger, Destiny did not understand what was wrong with her mother. As she would soon learn, her mother was diagnosed with the gene that causes Huntington’s disease (HD).

“When I was a kid, I didn’t understand my mom’s sickness,” said Destiny. “I’d always write her get well cards. My brother wouldn’t drink because he thought he’d catch the disease like a cold.”

At a young age, Destiny would become the caretaker and the role took an emotional toll on her.

“My step dad wasn’t emotionally stable or equipped to care for my mom so a lot fell on me,” Destiny explains. “I felt powerless because I knew my mom needed to be cared for but I didn’t know how to do so. There’d be times I was left all alone with her, unsure of what to do, while she choked or came into the living room with an unloaded gun asking how to use it. I felt alone because no one I knew understood the pressure I was under and how much, at times, I wanted to end my own life.”

In 2012, her mother passed away due to complications from HD. Destiny was only fifteen-years-old at the time but her HD story wasn’t over yet. Each child of a parent with HD has a 50/50 chance of inheriting the faulty gene that causes Huntington’s disease. Today, there are approximately 30,000 symptomatic Americans and more than 200,000 at-risk of inheriting the disease.

“There were different forms of abuse in my family growing up so I never knew, at first, if the things my sister was doing, like running away with guys, not doing well in school, etc were psychological symptoms of HD just simply because of the way we grew up with a sick mom, abuse, biological dad not present, and step dad physically but not emotionally present,” said Destiny.

In 2016, her younger brother had been in jail for three years. When he was eighteen-years-old, he tested positive for the gene that causes HD. He was soon released after he was beat up and suffered a broken cheekbone.

“He came back to an unstable environment where his medicines weren’t being monitored and he wasn’t being taken care of,” said Destiny. “He began cutting because of the pain, of which the scars you can still see very evidently on his arms.”

Her brother would spend another nine months in jail and was put into isolation. According to Destiny, he was not put on proper medication, not being properly cared for, depressed, and put on suicide watch.

“I don’t blame him for wanting to take his life,” Destiny explains. “I’ve been there too, but I can’t imagine how much worse he felt. He and my sister were stripped away of all of their dreams to make a better life for their future family. A life full of love, not abuse. A life full of good memories and laughs, but instead, they were given a death sentence before they even had a chance to live. Our life was marked with great pain and hard memories, not just because of HD.”

In December of 2018, Destiny started dating and realized that she wanted to be tested for HD.

“I told him I had a lot of emotional pain to walk through because of physical, emotional, and sexual abuse,” said Destiny. “I wanted to give him every reason to leave. Including the unknown of HD. Yet, I felt God prompt me to wait it out and not talk about HD right away. Not to define myself as trash because of an unknown genetic future. As we started talking about pursuing a future together in marriage, I wanted to get tested. I honestly didn’t think too much about it and although it was a scary step, I felt so much peace.”

In April of 2019, Destiny tested negative for HD.

“To this day, I don’t think I’ve fully processed it,” Destiny explains. “There’s definitely some guilt I feel that my younger brother and older sister went through so much more growing up and never had a chance to live differently. Yet I did. And still can. I may not experience the symptoms they do, but I can grieve with them and fight FOR them. I’m thankful to God that He’s given me an opportunity not only to heal from past pain, but also to live authentically and be a voice to those who don’t have one.”

In the HD Community, before going to college and moving to New Jersey, Destiny was very active in the Delaware area throughout high school. She helped organize the Delaware Team Hope Walk in 2013, 2014, and 2015.

“I hosted a Twitch screening at my church, shared about HD at my school, a few churches, on our local news channel, two local radio stations, and of course on social media,” Destiny explains. “Also sold fudge one year in high school to raise money for HDSA. In fourth grade, I collected pennies at my school that classmates would bring in to give to HDSA for research.”

As Destiny helps others in the community, it shows her that she is not alone in her HD life.

“My heart breaks knowing that I’m not the only one who has witnessed their loved ones being mistreated: yelled at, pushed around, and blamed for things they can’t control,” said Destiny. “Seeing nurses, aids, the health care and government system fail us time and time again, getting paid but (not all, but most) neglecting to do their job well.”

“I wish I could change those things so that those with HD were treated with the value that they have, but I can’t change those people’s hearts,” Destiny explains. “What I CAN do, I choose to do- to inform those of the reality of HD and to share my story in hopes that a different story can be written for others wrestling with HD; for those being neglected, written off, and left to suffer alone.”

Destiny has a message for the HD Community:

“Although it’s painful to see my family die before my eyes, I rejoice that I can be inspired by them to live differently and be a light to others, fight for those who can’t fight for themselves, and speak up. To my mom, brother, sister, and all of my dear friends who have or know someone with HD, I PROMISE to be bold, to speak up, and fight for you because you have a place and a purpose in this world. Regardless of the differences others see, calling you psychotic or a drunk, I see SO much value and strength in you because you’re still here. Still fighting when it’s extremely hard and feels hopeless to live.”