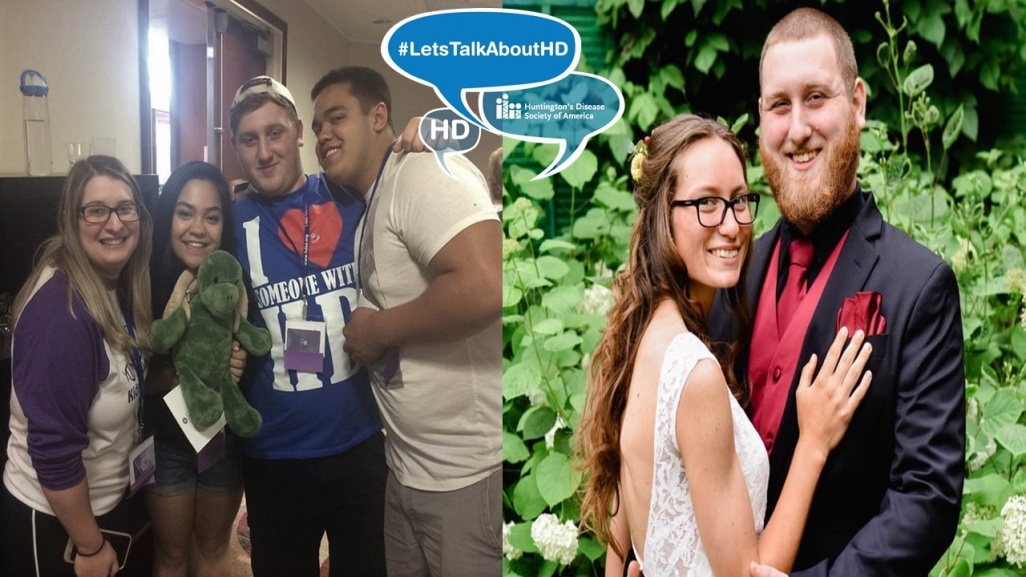 At a young age, Draque Ricco from Illinois came home from school and his family wanted to discuss a topic with him and his sister. His grandfather and mother were diagnosed with the gene that causes Huntington’s disease (HD).

HD is a fatal genetic disorder that causes the progressive breakdown of nerve cells in the brain.  It deteriorates a person’s physical and mental abilities usually during their prime working years and has no cure.

Before this, Draque never met his grandfather.

“At that time, I didn't understand what it really was until I went and met my biological grandfather for the first time it became more real for me,” said Draque. “He was in the late stages of HD and needed assistance doing most everything.”

After meeting his grandfather, Draque and his family started to participate in different studies at the University of Iowa. This is one of the 50 HDSA Centers of Excellence that provide an elite team approach to HD care and research. Professionals have extensive experience working with families affected by HD and work together to provide families the best HD care program.

According to Draque, his mother became verbally abusive and reminded him how he feared the HD symptoms when he saw his grandfather. As the years went on, she was given the right medication and does not remember that time period. Draque and his sister always explained it was cause of HD and the family dealt with it.

They both knew their chances of having HD. Every child of a parent with HD has a 50/50 chance of inheriting the faulty gene that causes Huntington’s disease. For Draque, his plan was to be tested at 18-years-old.

During the testing process, he closed off his family because he was now an adult and wanted to be alone. However, his family showed up anyway including his father as he had a difficult relationship with him. Draque’s father wanted to be there for his son.

Draque tested negative for HD. As his family was happy for him, he did not feel the same way. Draque went through survivors’ guilt and felt he lost his identity. During this time period, he went into a dark place as he was living by himself.

There were times where Draque would contemplate suicide. One night, he had his friend’s gun with him and wanted to take his own life. However, the thoughts went away as he wanted to turn his life around. Draque moved back home to be with his family and things slowly got better for him.

He knew that he had more than one family by his side. He has the “ohana”.

“For a good time till I was 16-years-old, I had never met another family with HD until that summer at the HD Youth Camp,” Draque explains. “This event was my gateway to the HD community. From this, I would attend conventions and retreats and HD walks in Illinois and Iowa.”

The connections that he made in the HD Community would lead him to HDSA’s National Youth Alliance. Established nearly twenty years ago, the HDSA NYA is HDSA’s nationwide youth program providing support, services and community to children, teens, and young adults affected by HD. With regional retreats, youth social workers and an annual event at the HDSA National Convention, the NYA is the most experienced youth support program for the HD community. As one of the older members of the NYA, Draque wants to make sure that the younger ones create the bonds that he did and always reminds anyone in the NYA that they are always there for each other.

“Draque is a person who lights up every room he enters,” said Jennifer Simpson, Senior Manager of Advocacy and Youth Programs. “His kindness, empathy and vulnerability provide a calming presence for new members at any event he attends. Draque has become a leader in the youth community, bringing new members under his wing and encouraging them to find support and open up about their experiences with HD. We are lucky to have someone like Draque in the NYA.”

Draque has praised Jennifer for her work in the HD Community and the NYA.

“Jennifer puts her heart in everything and brings the best out of everyone,” said Draque. “She is there for everyone.”

Draque recently moved to Mount Olive, North Carolina with his wife as he is attending the University of Mount Olive for music education. He is looking to be a part of the North Carolina Chapter and continue to assist with the NYA. Draque has a message for the HD Community:

“The biggest thing that the HD community has done for me was give me valuable connections that I will never forget. They have given me friends that can advise me in HD and non-HD related problems. No matter what The HD community is there for me and any others who need a shoulder to lean on.”

“Never Forget and Never Surrender. Only together we can fight this.”

Huntington’s disease is a fatal genetic disorder that causes the progressive breakdown of nerve cells in the brain.  It deteriorates a person’s physical and mental abilities usually during their prime working years and has no cure. Every child of a parent with HD has a 50/50 chance of inheriting the faulty gene that causes Huntington’s disease. Today, there are approximately 41,000 symptomatic Americans and 200,000 at-risk of inheriting the disease. In less than 10% of cases, juvenile Huntington’s disease (JHD) affects children & adolescents. JHD usually has a more rapid progression rate than adult onset HD; the earlier the onset, the faster JHD progresses. HD is described as having ALS, Parkinson’s and Alzheimer’s diseases – simultaneously. HD is characterized by a triad of symptoms, including progressive motor dysfunction, behavioral disturbance and cognitive decline.