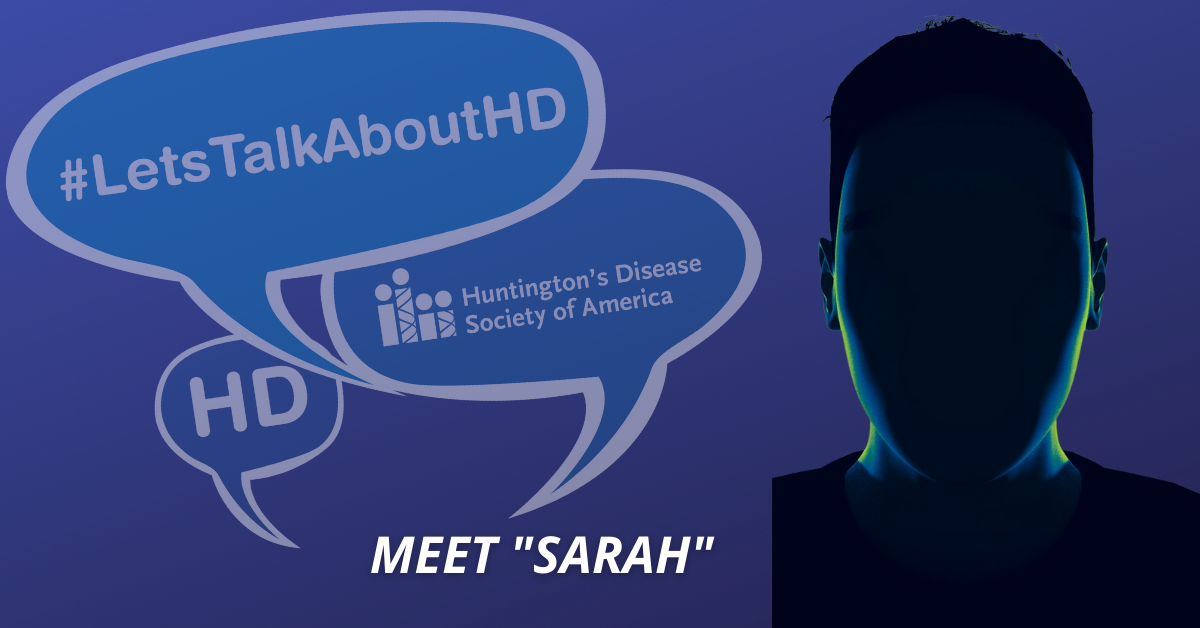 The following story features someone who was willing to courageously share their story, but remain anonymous.

New York resident “Sarah” learned about Huntington’s disease (HD) at a young age. HD is a fatal genetic disorder that causes the progressive breakdown of nerve cells in the brain. It deteriorates a person’s physical and mental abilities during their prime working years and has no cure.

Her grandmother was her best friend and she had a lot of memories of seeing her every day after school. However, her talking was limited as she was diagnosed with the gene that causes HD.

When she was about 3-years-old, her grandmother died. The HD journey would not be over just yet. “Sarah’s” mother was at risk for HD. Every child of a parent with HD has a 50/50 chance of inheriting the faulty gene.

“Sarah’s” mother was an elementary school teacher. She loved her job and educating children. However, she started to have angry outbursts as her and "Sarah” would constantly have arguments.

Throughout school, “Sarah” had mental health problems of her own. She has suffered with anxiety and trauma issues. “Sarah” has seen more than thirty therapists until finding that made her feel the most comfortable. When she was younger, her mother got her into yoga to ease stress and relaxation. As “Sarah” got older, she started to pick up yoga again which also helped her anxiety issues.

By the time “Sarah” was a sophomore in high school, her mother learned that she tested positive for HD.

Before her family explained the news, “Sarah” did not know what was wrong with her mother as she thought it was Parkinson’s disease. The social worker explained to “Sarah” what was going on with her mother, but the family was extremely private regarding her health.

In her family, HD is barely or if at all discussed. For example, according to “Sarah”, her grandfather felt that the younger generation should not be involved in adult situations, even though this could affect their future with the 50/50 chance. As for her father, he wasn’t in shock about the diagnosis but in denial at first. He also wanted to keep it quiet.

With her mother testing positive, “Sarah” and her other sibling are at risk for HD. “Sarah” wants to get tested for HD before she has children.

“I don’t want my children to have to go through the anxiety I and so many others have about potential positive results,” said “Sarah”.

Even though her mother and her side of the family will not talk about HD, “Sarah” has found her father as an ally to discuss this with. She describes her father as a best friend. He has assisted with HDSA’s Team Hope Walks. Team Hope is HDSA’s largest national grassroots fundraising event. Thousands of families, friends, co-workers, neighbors and communities walk together each year to support HDSA's fight to improve the lives of people affected by HD and their families.

However, her father did not allow his children to be involved with HD events and was not allowed to go to HD youth events. Now that “Sarah” is of age, she wants to be involved as much as she can with events and raising HD awareness. According to “Sarah”, it is important for young people at risk to learn more about HD.

“Sarah” has a message for the HD Community:

“You are not alone. Volunteer and be apart of the cause.”