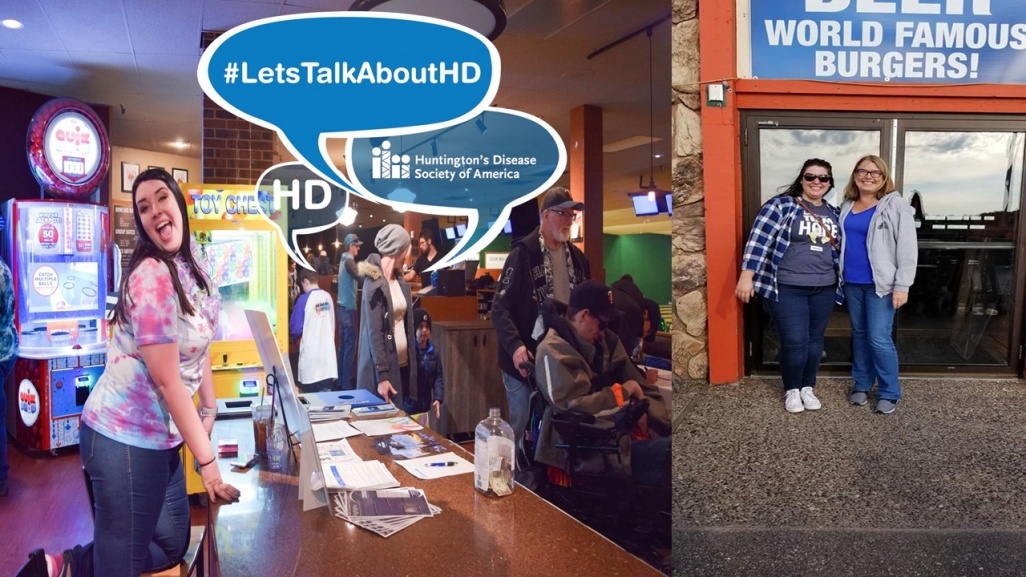 This is a fatal genetic disorder that causes the progressive breakdown of nerve cells in the brain. It deteriorates a person’s physical and mental abilities during their prime working years and has no cure.

“I knew nothing of the disease that would eventually become an everyday encounter,” said Katie.

The family would then live a normal life as there were no health problems until 2008. Her mother was diagnosed with breast cancer and would eventually remission. However, her father would not be so lucky. He knew that he had a chance of having HD but would never get tested. Each child of a parent with HD has a 50/50 chance of inheriting the faulty gene that causes Huntington’s disease.

“He has never been tested, but due to his movements and his family history, the doctors agreed he had it,” said Katie.

The symptoms of Huntington’s disease are described as having ALS, Parkinson’s and Alzheimer’s – simultaneously. Other symptoms include personality changes, forgetfulness, slurred speech, difficulty in swallowing, and significant weight loss. To learn more about the symptoms, click here.

“Thankfully, we have an amazing HD specialist here in Minnesota that saw my grandma and now sees my dad.”

Her name is Dr. Martha Nance. According to Katie, she is a legend who genuinely cares about her patients and is an expert in the research field. She has also contributed to HDSA with reading materials about the disease.

Her mother is the main caregiver. Last April, at the age of 24, Katie would move out of her house and move into an apartment with her boyfriend.

“It was the only house I had ever known, as they brought me home from the hospital in that house,” Katie explains. “I felt an extreme amount of guilt for leaving my mom to care take for my dad full time by her lonesome. However, I am only 9 minutes down the road, and I see my parents almost every day.”

As for her future, Katie does not wanted to be tested and she is not alone. In fact, only 5-10% of at risk patients want to know their future. “For me, I don't want an answer to something that I cannot solve. Since there is no cure or even treatment, it seems as though knowing my answer is useless.”

For Katie, she does not want the disease to affect her life right now. She wants to live her life to the fullest and if the disease affects her when she is older then so be it.

“I won't let it take away anything from the life I do have before HD potentially becomes my life,” Katie explains. “Plus, with all of the research advancements, I am hopeful that there will be a treatment or cure by the time I am old enough to be symptomatic. If not in my lifetime, I am extremely hopeful there will be a cure/treatment in my kid’s lifetime.”

Katie is not giving up and is fighting for the cause. She wanted to get involved and eventually became HDSA’s Minnesota Chapter President. It has been a whirlwind three months for her coordinating events but she knows that every single minute planning is one step closer to helping end this disease. She has Chapter Vice President Tarole Hager Rettke by her side and fighting the cause.

“Katie has a sort of energy about her that exudes her personality,” Tarole explains. “People are drawn to her because of this. Everything I have witnessed in her has shown a sense of strength and knowledge you generally don’t see at such a young age. With new ideas, a fresh perspective and energy, she is not afraid to take a level amount of risks to break the status quo as President of HDSA Minnesota Chapter. It is my pleasure to serve as her Vice President and believe the feelings are mutual through our chapter and Board. I see great things unfold with Katie as our leader.”

She is also the Regional Lead for the National Youth Alliance (NYA). Katie is passionate to provide more resources to the younger generation as she did not have many resources when she was growing up.

“There are a variety of resources for all ages,” Katie explains. “The NYA has been a life changing community for me. I have met some of my best friends and biggest support systems by attending retreats. In the long-term, I would love to become more involved in the NYA, as my passion is really about helping young people combat this awful disease with all of the support they deserve.”
She has a message for the HD Community:

“Keep hope alive. The disease is so awful, so it is hard to dig yourself out of the hole of day-to-day life. However, if you do poke your head out occasionally, you will see that science and medicine is coming along. There are a variety of options being perused in research. Since so much is happening, it is extremely hopeful that the end of the disease is near and get the help that you need.”