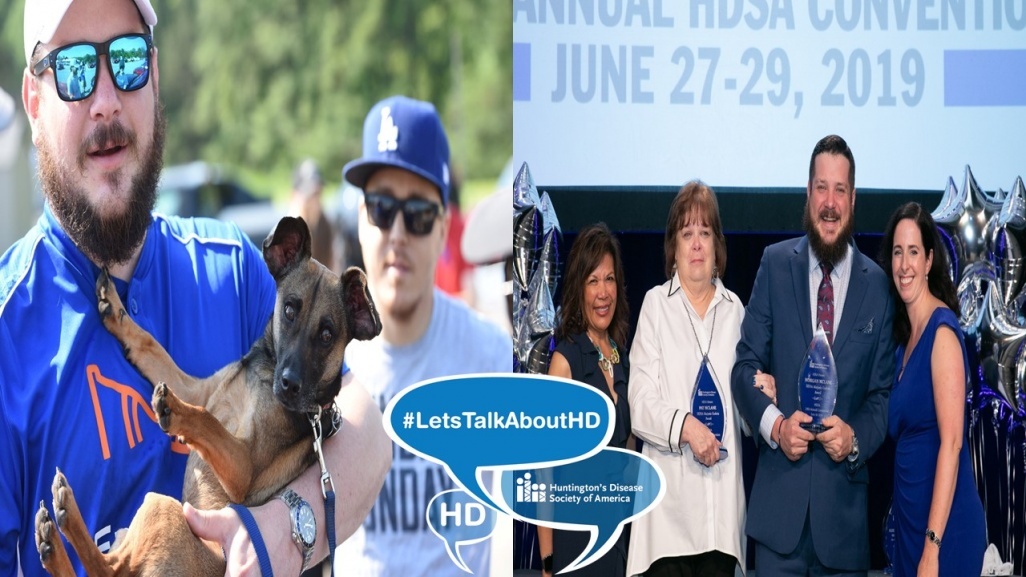 As HDSA formed more than fifty years ago, Marjorie embodied the “can do” spirit that has made HDSA a pivotal organization in the fight against HD. She devoted her life to improving those affected by Huntington’s disease (HD) through legislative, community, and individual action long before the gene that causes HD was discovered.

The Marjorie Guthrie Award recognizes a member of the HD community who has, through their compassionate leadership, improved the lives of all persons living with HD either in their community or nationally.

Before Morgan won the Marjorie Guthrie Award alongside his mother, he shared his experience with HD and why he goes above and beyond for the HD community.

However, Morgan does not have to worry about inheriting HD as the disease is not in his family. His mother has a half-sister and she was diagnosed with HD in 1999. Before diagnosis, she was very symptomatic but the family did not pick up on early signs because they did not know what Huntington’s disease was.

Morgan’s aunt would have a split personality. For example, when he was younger, his aunt would babysit Morgan because she retired early in life. Once his parents dropped him off, everything was normal. Then, twenty minutes later, his aunt would turn into a different person which left a young Morgan very confused and scared.

According to Morgan, she would become very mean and over the top with her disciplinary actions. Morgan would get spanked and she would chase him around the house screaming. In the house, the dining room was very small. Morgan’s aunt would crawl over the dining room table just to get to Morgan.

After all this, she would clean the entire house like nothing ever happened once Morgan’s parents picked him up. As a young child, he tried to explain what he was going on but nobody believed him because he was only a kid and they did not believe that his aunt was like this.

Once she was diagnosed and the disease progressed further, she would be place in an assisted living facility and then a nursing home. She would later pass away due to complications from HD.

When he was nineteen-years-old, Morgan saw an opportunity to raise money for HD as his two older cousins and five younger cousins are at risk for HD.

Morgan founded FastTrackPGH in honor of his aunt (formerly “Barbara Lee’s Fast Track to a Cure for Huntington’s Disease). It is an autocross event held in the late spring that raises funds for HDSA’s Western PA Chapter. FastTrackPGH works closely with North Hills Sports Car Club (NHSCC) every year to provide a safe and controlled environment for the fundraiser. Event spectators can grab their lawn chairs and set up camp for the day to watch all the action at the North Park Pool parking lot. Also, the event includes great food, auction items and goodies for sale.

Morgan has also been a member of HDSA’s National Youth Alliance. For several years, the NYA is a collection of children, teens, and young adults from across the country that motivates young people to get involved in their local HDSA Chapters, Affiliates, and Support Groups. He has been praised for the amount of work and contribution during his time with the NYA as the Fundraising Chair. According to Morgan, the NYA would not have grown or have its voice without Board Chair MaryAnn Emerick leading the way.

“Morgan is the definition of determination,” said Ashley Pesi, NYA Fundraising Chair. “I have never met someone with so much drive and love in making things happen. He is the heart of the NYA and will always be my mentor.”

“Morgan is a force of nature,” said Jennifer Simpson, Senior Manager of Advocacy and Youth Programs of HDSA. “Whenever Morgan walks into a room, you know that he’s about to shake it up, always with a smile, and a laugh that is immediately infectious. Morgan is dedicated to making sure that this is the last generation impacted by HD, and each day he is resolved to see that goal come to fruition. Whether it’s through the work he did as a member of the NYA board or translating his passion for fast cars into a fundraiser that is now a pillar of the Western Pennsylvania community, Morgan knows how to make things happen.”

“As an aside, he also gives excellent hugs. Next time you see him, give him one.”
Morgan has a seven word message for the HD Community: