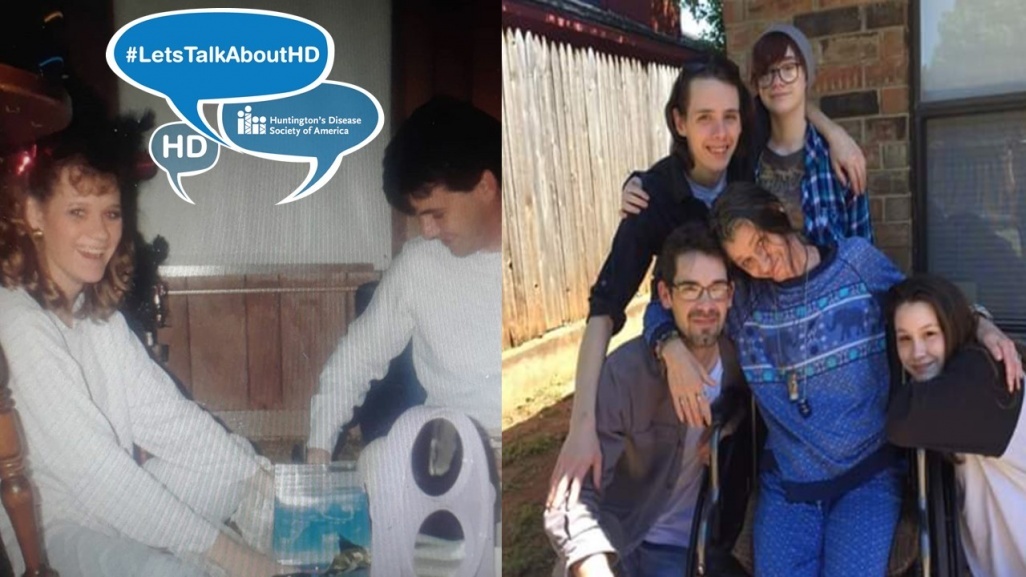 MaKenzie Cordell has lived in Oklahoma City her entire life. She is one of five children. Before she was born, her grandfather died but MaKenzie had a little information of what happen. “My mother only ever told me it was because he had got sick,” said MaKenzie.

It wasn’t until she was 9-years-old when she first learned about Huntington’s disease (HD). This is a fatal genetic disorder that causes the progressive breakdown of nerve cells in the brain. It deteriorates a person’s physical and mental abilities usually during their prime working years and has no cure.

For the next five years, her mother was in denial and any mention of HD would push her over the edge. Her sister tested positive for the gene that causes HD but her mother was convincing herself that she was fine. However, she was suffering from behavioral and physical symptoms related to HD.

“I heard my mother and father arguing about whether or not she was showing signs of HD,” she explains. “My mother was angry and in denial. She felt betrayed by her own family because we wanted her to go to a doctor.”

During this time, she and her younger sister had to rely on their mother and older siblings. “In 2009, my father was battling his opiate addiction that had followed him since his spine surgery in 2003,” said MaKenzie. “We were in a cockroach infested and bed bug ridden motel for a year and a half. When Christmas of 2010 came along and he had no money for gifts or rent, he robbed a bank. He made an anonymous donation to the bank some weeks later and then turned himself in."

“When my father was released on probation, my mother begged my grandmother to let him stay with us at the house,” said MaKenzie. “This was weeks of her sobbing to my grandmother. My grandmother never gave in to my mom's begging and crying, so that made my mother hate her with a sickly passion. This would happen all day and all night. I couldn't sleep and I didn't understand why my mother was acting this way.”

Her father ended up staying in a rehab house as her mother would bring the children to visit them as much as she could. Meanwhile, at her grandmother’s house, her mother would not let them sleep in the actual house as the relationship between the two was deteriorating.

“The mother-daughter bond that they had before was shattered, and the mother daughter bond that I had with my mother was visibly struggling to stay together,” she explains. “I was scared of her. She would not let us sleep in the house in our beds. We slept on blankets and a deflated air mattress in the garage. There were boxes upon boxes of our old things, animals getting in and out, dog urine all over the garage.”

By the time she was 12-years-old, she wanted to learn as much as she could about HD and her family. MaKenzie learned disturbing news about how her grandfather and his sister passed away.

“I found out that my grandfather had shot himself in the head, his sister had attempted suicide and ended up dying to a pneumonia,” said MaKenzie. “That almost everyone before had always at least tried to kill themselves. But she wouldn't and I was thankful.”

She would feel discouraged and lost. When she was 13-years-old, she contemplated suicide. If you are feeling suicidal, log on to the National Suicide Prevention Lifeline or call 1-800-273-8255.

“I wasn't finding any joy or happiness because everything was toxic and emotionally draining,” MaKenzie explains. “My grandmother was a very negative person, and my mother became more obsessive and angrier by the day.”

Due to certain circumstances, her family left her grandmother’s house and moved into her older brother’s one room apartment. This would not last long as the relationship between him and the family diminished that resulted in moving once again. With all the moving, MaKenzie had a tough time in school.

“My depression and anger really kicked in here,” she explains. “I was very isolated. No one from school understood what was happening. They claimed I was lazy and good for nothing, dumb, couldn't graduate middle school. So, I lost most of my friends.”

When she turned 14-years-old, her father returned and could not believe the state that her mother was in. MaKenzie would baby sit to have extra money and it would go towards bills and food. That next year, she moved to a nicer area and was ready to go back to school.

However, the move did not sit well with her mother.

“She took all my records,” said MaKenzie. “Social Security card, birth certificate, medical records, everything important and threw it in the dumpster right before the trash truck came to pick it up. I couldn't go to school without those things. I baby sat some more to get the money and ended up getting all my stuff together again. Secretly and behind her back, my little sister and I were going back to school.”

Her mother eventually found out and hit her own son on his arm with a metal broom stick. She calmed down, went to her first doctor’s appointment, and was diagnosed with HD.

Her mother could not work as the family was scrapping for money as her father contributed as much as she could as well as being her mother’s full-time caregiver. MaKenzie would eventually drop out of school and worked full time.

“I became a Kennel Tech at Hefner Road Animal Hospital,” she explains. “I was not doing good mentally. I was all over the place and never happy. I began therapy and started anti-depressants. As time passed by, I didn't know if I was getting stronger or if the struggle of life was just shifting it's weight. I felt weak but at this moment in time, I was the main source of money for the family.”

At 19-years-old, she wanted to be tested for HD.

MaKenzie ended up not getting tested as she got kicked off her insurance plan and could not finish genetic counseling.

In November of 2019, MaKenzie and her fiancé were planning their wedding for June of 2020. They were planning everything around her mother as it was going to be an indoor venue with certain foods that she could eat. Due to COVID-19, their venue was cancelled but her mother’s health was deteriorating. “We spent her birthday with her on March 27th,” said MaKenzie. “She began dropping weight very fast and refused to eat because she was having intensely painful neck and back pains when she did. She would cry. Her neurologist would give her a pain-relieving injection and she would eat but it would wear off. She refused the feeding tube, and went with physical therapy. She was excited about it too. Clapping her hands and saying she'd be able to get better and do her "happy dance" again.”

Her mother was able to see her own daughter in a wedding dress. “Something about her right then and there,” she explains. “Fear had washed over me. I put on my dress and walked down the hall to show her. It was the first time I saw her smile in a week. She gave me two claps and said it was very pretty.”

This is one of the last moments she had with her mother as she passed away.

“There wasn't any coughing or struggling,” said MaKenzie. “She just left. I don't know what I'm going to do now. She was my life and I didn't ever realize it until she left. She is the reason I never moved out or ran away. It was always her.”

More than anything, music has helped MaKenzie express her emotions and her mother was an inspiration for her songs that she wrote for her and sang to her.

At the 35th Huntington’s Disease Society of America’s (HDSA) National Convention, MaKenzie (singing “By the Sea”) and her sibling, KC, (MaKenzie taught KC how to perform “For You”) took part at HDSA’s National Youth Alliance (NYA) Talent Show. Established nearly twenty years ago, the HDSA NYA is HDSA’s nationwide youth program providing support, services and community to children, teens, and young adults affected by HD. With regional retreats, youth social workers and an annual event at the HDSA National Convention, the NYA is the most experienced youth support program for the HD community.

MaKenzie has a message for the HD Community:

“No matter how much this disease manipulates and molds you, don't ever for a second believe that it is winning. We are some of the strongest individuals in our time and we will never give in without a war. It is ugly and painful because we are fighting for every single life that HD has touched whether it be a care giver, a person at risk, or the person with HD themselves. Don't stop until we find the cure and end this fight once and for all.”