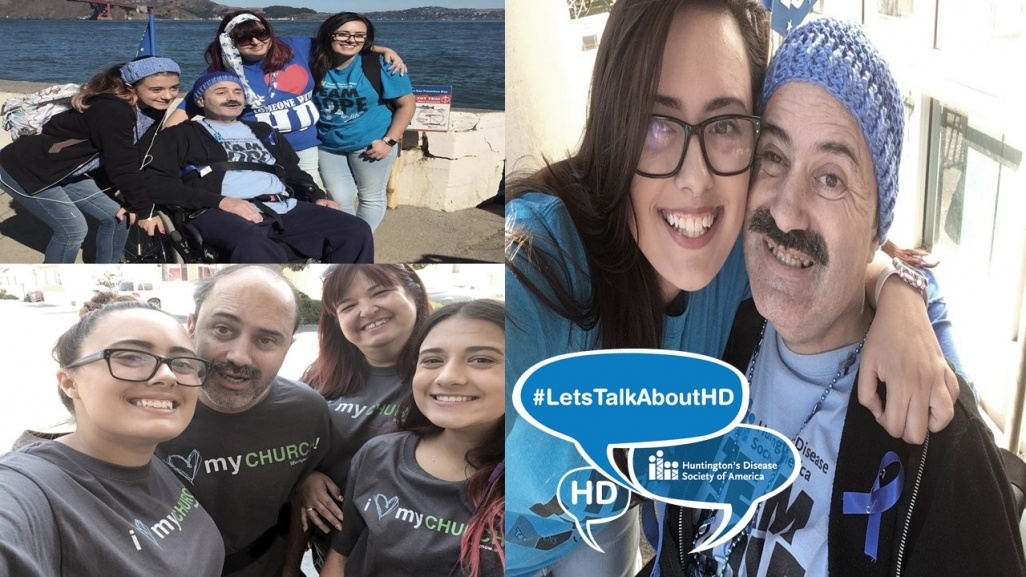 Growing up, Rebekah Granlund’s best friend was her father. He taught her how to ride a bike, get doughnuts after tee-ball, and she always could rely on him for a “yes” answer. By the time she was in 5th grade, her life began to change.

Rebekah just came home from science camp. Her mother took her out for lunch as they talked about how camp was. Then, Rebekah remembers pulling a brochure out of her mother’s bag and asked, “What’s wrong with daddy?”

Rebekah’s mother told her that her father was diagnosed with the gene that causes Huntington’s disease (HD).

“I know I cried,” Rebekah explains. “I somewhat recall her asking me if I noticed any changes in my dad’s behaviors and abilities, and at the time, ten year old me really couldn’t point anything that stood out. Looking back on it now, though, the more frequent stumbling, falling, and overall lack of balance was definitely the first onset of physical symptoms we saw in my dad.”

As the years went on, she learned more about her father’s HD journey. In 1996, a year before Rebekah was born, he decided to get tested for the disease after finding out about his family history with HD. Her uncles would later get tested and both were positive as well. Each year, 5-10% of at risk patients get tested.

“My dad inherited from his father,” she explains. “Originally, it’s my understanding that they thought my grandpa struggled with alcoholism. My family came to realize that a lot of my grandpa’s early symptoms were masked by alcoholism.”

Rebekah would notice more physical symptoms including lack of balance and tremors. However, it wasn’t until the summer between 7th and 8th grades that she noticed more of his mental symptoms. In her eyes, HD turned her best friend into a monster.

“He was a lot quicker to get angry, and just had a really short temper,” Rebekah explains. “Then, it escalated. The short temper combined with physical anger. He would throw things, scream and yell, and he became a very angry person. These fits of anger became more and more common--so common that my mom started keeping a backpack with extra clothes in the car, because there were times that she would take my sister and me to a hotel for a night because my dad wasn’t safe to be around.”

In 2010, he retired from his job. Rebekah remembers how HD was affecting his memory as well. Every morning, he would leave himself a letter which included the date, day of the week, where his lunch is, to take his pills, and what time the family would be home.

“His head hit the tub, and he went unconscious,” Rebekah explains. “We called 911, like we did most time he had a really bad fall, and they took him to the hospital. It was at this time that the doctors advised us to seek 24-hour care for my dad. My mom quit her job, and became his caregiver through In-Home-Support-Services. It was a drastic change, but we were determined to keep my dad at home, comfortable in our care for as long as possible.”

Recently, the family decided to put her father into a long-term nursing home because of his heavy demands for care. Rebekah knew that this was coming as this came sooner rather than later.

“It’s hard not having him at home every day, filling the house with his loud yelling (or laughing), constantly demanding cookies and Coca-Cola...but I know that it’s better for everyone’s physical and mental health that he’s cared for elsewhere.”

Rebekah has found a great support system through HDSA. In 2017, she went to her first HDSA National Convention where she met a lot of young people and it made all the difference for her. She has been to several HDSA events including the Team Hope Walks.

She has also been involved with HDSA’s National Youth Alliance (NYA). This is a collection of children, teens, and young adults from across the country that motivates young people to get involved in their local HDSA Chapters, Affiliates, and Support Groups. Rebekah has appeared at NYA Retreats and NYA Day.
“HDSA’s events have truly introduced me to some of the strongest people I know, and they make this fight a little easier,” said Rebekah. “I know that I can call any of these people when I’m having a particularly bad day, or if I feel lost and alone in this journey. Volunteering with these people and going to events throughout the year truly make a difference in me.”