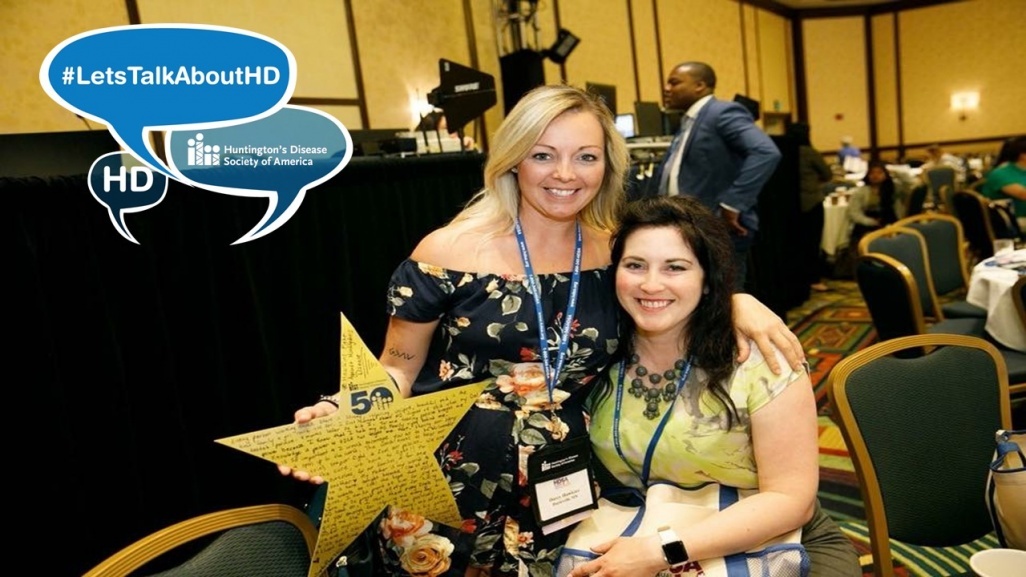 One moment can change your life forever. Before 2016, Darcy Hawkins thought about one day having a family and watching her children grow up. However, life can work in mysterious ways.

On August 23rd, 2016, she was notified that her father was diagnosed with Huntington’s disease (HD). This is a fatal genetic disorder that causes the progressive breakdown of nerve cells in the brain. It deteriorates a person’s physical and mental abilities during their prime working years and has no cure.

Darcy’s grandfather also had the disease. Each child of a parent with HD has a 50/50 chance of inheriting the faulty gene that causes Huntington’s disease. Today, there are approximately 30,000 symptomatic Americans and more than 200,000 at-risk of inheriting the disease. Before her father’s diagnosis, she did not know what HD was.

“This was the day HD became a part of my life forever,” Darcy explains. “My father is my best friend and the thought of watching him go through something so terrible at such a young age broke my heart.”

Once she found out, Darcy went to research mode as she would find out more about the symptoms of the disease through hdsa.org. The symptoms of Huntington’s disease are described as having ALS, Parkinson’s and Alzheimer’s – simultaneously. It usually appears between the ages of 30-50 and worsen over a 10-25 year period. Symptoms include personality changes, depression, memory loss, involuntary movements, slurred speech, difficulty swallowing, and significant weight loss.

“HDSA provided me with answers to the million questions I had going through my head, directed me to upcoming events in my area, and more importantly made me feel like I was no longer lost or feeling alone,” said Darcy.

She then faced a tough decision. Should Darcy get tested? At the time, Darcy was 31 years old. For her, this was a very tough decision as this would affect her entire life. 5-10% of at risk patients get tested for the disease. She would decide to get tested.

“I knew if I was gene positive, then I could walk alongside my father, lift his spirits, show him that it will all be okay, not let HD define him, and that there was a beautiful life out there to be lived,” said Darcy. “Knowledge is power. I am blessed that I have the opportunity to prepare for my future. Past generations were not as fortunate. Also, more than anything in this world I want to be a mother and I know I will have to make there will be decisions about that aspect of my life.”

In January of 2017, she tested positive. According to Darcy, she felt at peace with the result and she can feel God’s love and guiding hand on her. However, she would be worried about her own future.

“I was taking a step back from everything I wanted in life,” Darcy explains. “I had so many questions about what I should do to prepare for my future. In a sense, I was planning my funeral. I was so fixed on what my life will end up being in the end that I stopped living for today. I no longer wanted to have children, I didn't want to be in a relationship, and I was no longer thinking about going back to school. I kept telling myself that I was doing it to protect other people.”

She would then go to a women’s conference called Flourish at River Valley Church that her life would change forever. This helped her truly understand the importance of flourishing and have a profound impact on her life.

“I needed to learn how to go beyond being just okay with my life and start to really thrive, creating meaning, happiness and well-being for myself and others,” said Darcy. “It's really that simple. If you think positively, surround yourself with an atmosphere that will help you to flourish. I believe therapy should be used as a tool to help individuals flourish. I believe that all individuals have the potential to flourish in their lives. People who flourish increase their happiness, well-being, and purpose in life.”

She would need that positivity for her twin sister, Elizabeth. The family arrived at the University of Minnesota. Her twin sister wanted to be tested for the disease as she had her entire family by her side. Darcy and her father already are positive as you can only imagine how her twin sister was feeling going into the hospital.

“I'm sure the feelings were different for each of us as our stories are different from one another, but we are all on the same journey and know that in just a few minutes our lives will change forever yet again,” said Darcy.

When the Genetic Counselor and the Psychologist came into the room, the family got up one by one to hear the results. They were both nervously laughing revealing the results because of the amount of family members that showed up. Elizabeth was negative for the disease.

“We all gasped as shock set in, crying the happiest tears we've ever cried,” Darcy happily explains. “That was the first time I seen pure happiness on my Dad's face since he tested gene positive in 2016. What a moment that was.”

“It was very hard for me to feel that in that moment because I didn't want to take that feeling of happiness away from my family and my sister. As I locked eyes with my sister Elizabeth across the table, she whispered I Love You to me and I knew it was going to be ok... WE were all going to be ok.”

Darcy would keep the positivity going as she was already helping in her local Minneapolis, Minnesota community. From 2017-2019, she was a Board Member for HDSA’s Minnesota Chapter and still volunteers for them. She has presented at annual education days around the country and went to two Conventions. She has also become a Regional Lead for the National Youth Alliance (NYA). At last year’s Convention, Darcy received the NYA Alumni Leadership Award.
“Life is a series of thousands of tiny miracles and we just have to notice them,” said Darcy. “If you would have told me a year ago that I would be involved in so much and be recognized for my advocacy, I’d say no way! But with the support of my family, friends, and the HD community, I am doing just that and so can you.”