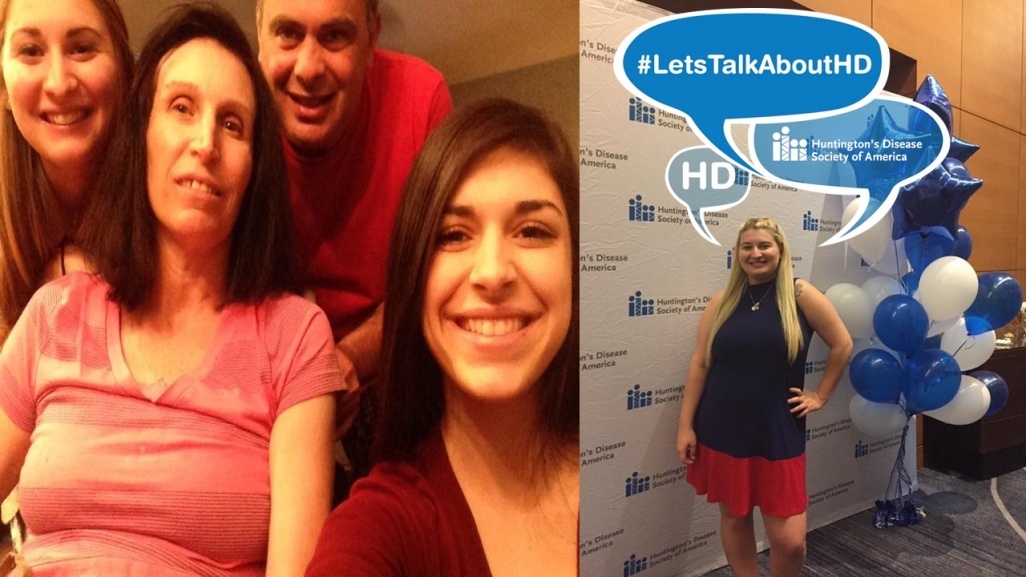 For Graduate students, it can be a stressful time as the workload has increased. It can be a lot to handle for some people but not for 24 year old Gia Mannone. She currently attends Stony Brook University in Long Island, New York.

Graduate work is nothing compared to the life that Gia has lived so far.

When she was only 10 years old, she and her sister found out that their mother was diagnosed with Huntington’s disease (HD) and was inherited from Gia’s grandfather. This is a fatal genetic disorder that causes the progressive breakdown of nerve cells in the brain. It deteriorates a person’s physical and mental abilities during their prime working years and has no cure.

“My grandpa had it when I was young but it didn’t really show,” said Gia. “In his case, he was mild compared to what I would see develop in my mom’s HD. My grandpa’s case was much more cognitive and behavioral than it was movements or speech.”

Once her father told her, Gia would go into research mode. The topic was talked about openly in her house as she also wanted to inform others about the disease. She wanted to talk about HD to anyone that would listen as it would be therapeutic for her to get her emotions out rather than keep it in.

Gia and her sister knew early on about the chances that they would inherit the disease. Each child of a parent with HD has a 50/50 chance of inheriting the faulty gene that causes Huntington’s disease. Today, there are approximately 30,000 symptomatic Americans and more than 200,000 at-risk of inheriting the disease.

“It didn’t become real until I read online all the horrible things this disease does and becomes that I really started to understand,” Gia explains. “It was a scary time for me, and I didn’t know anyone else, but my younger sister, that was going to have to go through this. However, being young, I went on with my little life.”

This was until her mother started to develop more symptoms of the disease. The symptoms of Huntington’s disease are described as having ALS, Parkinson’s and Alzheimer’s – simultaneously. This includes personality changes, mood swings, forgetfulness, involuntary movements, slurred speech, difficulty in swallowing, and significant weight loss.

“Classmates started pointing out that my mom was walking funny at school events, or hearing my dad talk about neighbors calling my mom a drunk,” said Gia. “I knew something was changing, and that it wasn’t good. But to me, my mom was my mom, and normal in my eyes, so I didn’t pay any mind to those people.”

Once she was in high school, her family invested in at-home aide. This would include helping around the house, taking her mother out, and took care of her even though she was independent by this point. Gia still wanted to know there was more like her in the world and found a local HDSA Team Hope Walk.

The Team Hope Walk program is HDSA’s signature grassroots fundraising campaign designed to provide hope and support for those touched by this devastating disease. Since its inception in 2007, it has appeared in more than 100 different cities.

In 2013, her family moved to Florida because they wanted to search for better doctors and a better quality of life for her mother. “There, we had another at-home aide, who became a part of our family. Even though I hated the idea, she became our greatest asset.”

The family decided early on that she would stay at home. “We would keep my mom at home no matter how hard things got because family was her everything that kept her going, and these were her wishes.”

However, her health was severely declining and her aide was moving. Hospice was the only option for the family. This was scary for Gia as she was now going to college in New York and would hear about all of the hospice care through her family, pictures, and videos and not see how she was in person.

“This is what I dreaded especially living 1,300 miles away from her and my family, not knowing what was happening, or how the care was,” said Gia. “It made me uneasy because this meant random doctors, nurses, more aides, coming in and out of the house all the time, and to me, no one knew and understood my mom better than my family and past aide did.”

“My mom was the strongest, toughest fighter I knew. She fought with a smile and laughed even though her body was failing her,” said Gia. “Luckily, I was able to make it home before she passed, and we surrounded her with love so she could pass peacefully, knowing she was loved."

To see Gia talk about what her mother has meant to her, please click here.

Since her mother has passed away, Gia and her sister wanted to educate others about HD. They want others to know that they are not alone in this world.

Gia has found more young people like her thanks to HDSA’s National Youth Alliance (NYA). This is a collection of children, teens, and young adults from across the country that motivates young people to get involved in their local HDSA Chapters, Affiliates, and Support Groups.

“I am now the Chair on the Youth Services and Recruitment committee for the NYA, have been to three HDSA Conventions (Boston will be my 4th), spoke at 2 Long Island Education Days, volunteered at Team Hope Walks annually since 2012, attended 1 NYA retreat, and spoke to social workers at two of HDSA’s Conventions,” said Gia.

For herself, Gia has wondered about her HD status and started planning out her life when she was 16 years old. Gia has made a decision about getting tested.

“Since my life up until 2016, has revolved around HD…it was time for me to live my life FOR ME. I know I will eventually get tested, but I am enjoying my life now with no regrets!”

Gia wants to become a social worker and help others in the HD Community go through what she has been through.

“My message to anyone in the community, especially youth, is to never give up,” Gia explains. “You are stronger than you think. And if you are afraid to jump right in and get involved, you have a whole family and community of people who are willing to help you acclimate and who are waiting to take you in! You will make friends, you will be able to vent. You will feel a connection with this community like no other. And you will NOT go through this alone.”