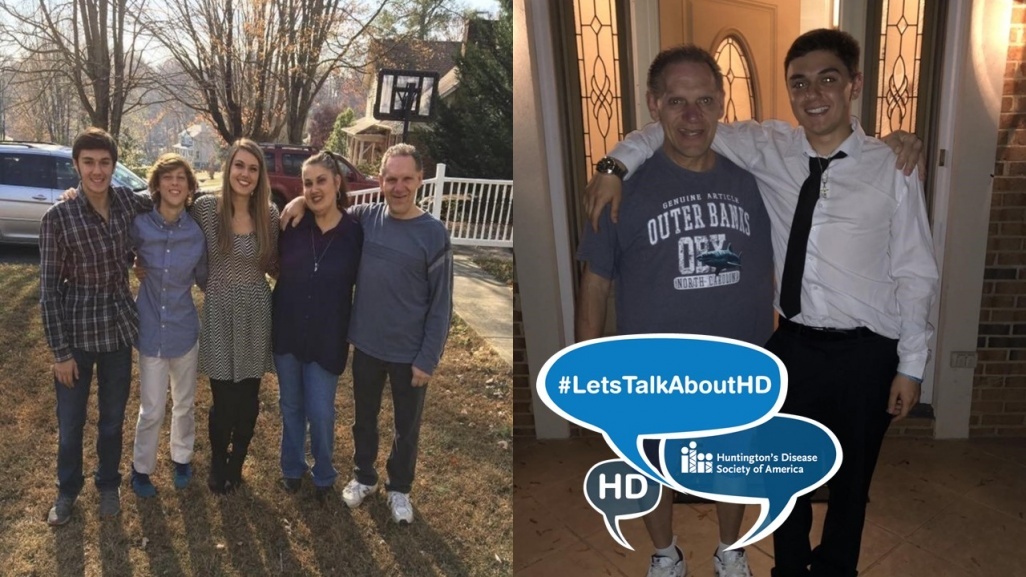 A young man that wanted to know what his future would be… no matter what the cost.

As Antonio learned more about HD, he knew this could be his future. Each child of a parent with HD has a 50/50 chance of inheriting the faulty gene that causes Huntington’s disease. Today, there are approximately 30,000 symptomatic Americans and more than 200,000 at-risk of inheriting the disease.

In his family, HD was inherited on his father’s side. Antonio has a twenty-five-year-old sister, Alyssa, and a seventeen-year-old brother, Gianni. Alyssa is a fourth grade school teacher and Gianni has aspirations to be an international professional soccer player.

They are all at risk for HD but his father made an important promise with his sister and brother.

“My father, his sister, and his brother all promised each other that they would not get tested,” Antonio explains. “They came from a “rub some dirt in it” traditional Italian family. My father has yet to get tested for HD or go to the neurologist for care.”

In 2016, at the age of nineteen-years-old, Antonio did not want to wait around anymore and decided to be tested for HD. There are some people that see no benefit in knowing while others want to know so they can make informed choices about their future. There is no “right” answer as the decision is intensely personal. Each year, 5-10% get tested.

“This caused wide divisions in my family.”

“I do not, and will not ever regret getting tested for HD,” said Antonio. “I do however, wish it did not cause the pain and worry that it has inflicted upon my family. After testing positive, I regained control of my life, planned out my future, and was able to truly envision what I wanted to do, what I wanted to achieve, and who I wanted to be, in case a cure is not found in time for my generation.”

Since testing positive, he has been increasingly involved with the HD Community. He has done advocacy work in Washington, D.C. and has been a member of the National Youth Alliance (NYA) for several years. The NYA is a collection of children, teens, and young adults from across the country that motivates young people to get involved in their local HDSA Chapters, Affiliates, and Support Groups.

“Antonio is a man on a mission,” said Jennifer Simpson, Senior Manager of Advocacy and Youth Programs of HDSA. “He sees a world where people are unaware of the impacts of HD, and he is determined to change that. When HD came into Antonio’s life, he was not only determined to make sure he had control over his own life and destiny, but he wanted to ensure that those around him had the support, knowledge, and information they needed to do the same. Antonio lives his life with HD proudly and is a guiding light to help others do the same.”

Antonio is lucky enough to have a great support system from family, friends, and Collin Aloi.

“I recently brought Collin to his first ever HDSA Convention in Boston,” said Antonio. “He is the first person I have ever asked to come with me to an HD related event. Seeing him learn, grow, talk, and get involved with our Ohana filled my heart with happiness and joy. Having a support system of friends, family, Ohana, and if you are lucky enough, a partner, is monumental to overcoming and coping with being affected by HD.”

With Antonio testing positive, his brother and sister now know that they are at risk for the disease. They have not been tested yet… which includes his father.

“My father denies any association to HD, though he knows I tested positive,” Antonio explains. “There are good days and there are bad days. We believe he is in the early stages of HD, with some psychiatric and cognitive symptoms. He also has some “ticks” but not full on chorea. It is extremely difficult for my family and I to genuinely know if he is “active” because getting him to go see the neurologist has been an uphill battle, but a battle that we will never give up on.”

Currently, Antonio attends Virginia Commonwealth University. He is majoring in political science, concentrating in international relations, and minoring in German. Antonio will be graduating in December and aspires to go to graduate law school to become a lobbyist and lobby on behalf of the rare disease community.

“I interned with the Mayor of Richmond, Levar Stoney, as one of his fundraising coordinators and will most likely work up the chain of command and try to find an internship with a member of Congress or senator after graduation.”

Antonio has his own blog and wants to educate people about HD. To read more, click here

He has a message for the HD Community:

“Get involved. Be vulnerable. Fight. Never give up. It’s not easy letting people this deep into your life, but trust me, the right people, want to be involved. They want to support you. I am a science nerd and let me tell you, there is hope.”

“There is always a silver lining and no HD warrior ever has to fight alone. We are here. We are here to fight. We are here to raise awareness and to cure this horrific disease one day. Who knows, that one day could be when you participate in the HD ENROLL trial and we have enough data and science to cure this intractable disease. We will. Stay strong. As my dad would say, “Be strong like bull.”