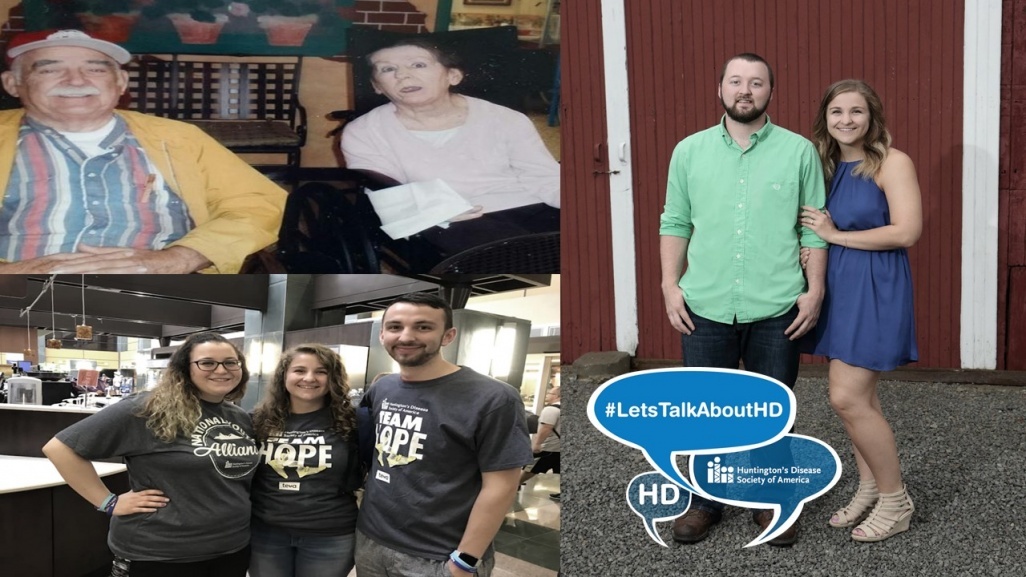 Life can always change in an instant. For twenty-six year old, Courtney Thiel from Upper Sandusky, Ohio, it did.

When she was younger, Courtney would see her grandmother and did not remember a time when she was normal. Her family was not open about this but her grandmother was suffering from Huntington’s disease (HD). This is a fatal genetic disorder that causes the progressive breakdown of nerve cells in the brain. It deteriorates a person’s physical and mental abilities usually during their prime working years and has no cure.

Courtney noticed that something was wrong with her grandmother but HD was something that they never talked about as she had clear signs of symptoms from the disease. The symptoms of Huntington’s disease are described as having ALS, Parkinson’s and Alzheimer’s – simultaneously.

“She was always moving,” Courtney explains. “Changing which leg was crossed over the other, tapping her feet, and moving her arms. She would sometimes get angry at one of my siblings or me for no reason. My family would never talk about HD. I’m not sure if it wasn’t something they wanted to admit or if they just weren’t educated enough about what she was going through. My mom was open to trying to help my sister, brother, and I understand what it was and what it meant for us.”

Her grandmother would eventually move into a nursing home and remained there for eight years. In 2014, she passed away due to complications from HD.

“Our bond makes us stronger than HD. No matter what happens in our lives, we get through it together,” said Cody Collins, Courtney’s brother.

Three years later, things were looking up for Courtney. She was a fourth year doctoral graduate student that was finishing her externship in Indiana and was planning on getting married later in the year.

Then, reality struck when her father tested positive for HD as he was starting to show early symptoms of the disease.

“It was very difficult to process everything that was happening. There were nights I could not sleep and I would stay up researching everything I could about HD. I was searching for the current studies. I was hoping to find someone to talk to. I tried to search for anything about the testing process or how to deal with it.”

As she was going through this, she decided to reach out to the genetic counselor at Ohio State University Wexner Medical Center. This is one of 47 HDSA Centers of Excellence that provides an elite team approach to HD care and research. Professionals have extensive experience working with families affected by HD and work together to provide families the best HD care program. Her father’s neurologist also worked there.

“I was able to get an appointment with her just to go over my dad’s diagnosis and to ask questions about the testing process, the current studies and options for family planning,” Courtney explains. “It was so helpful to just get some answers.”

She would go on to finish her Doctor of Audiology degree and get married as he is nothing but supportive of their HD journey.

By the end of that same year, she started to become more active on social media as she was connecting with other people in the HD Community. Courtney was then added to HDSA’s National Youth Alliance (NYA) Facebook page. NYA is a collection of children, teens, and young adults from across the country that motivates young people to get involved in their local HDSA Chapters, Affiliates, and Support Groups.

“My siblings and I then decided we wanted to attend one of the NYA Retreat weekends,” said Courtney. “We applied to go and went to New Orleans last September. It was such an amazing weekend. I remember feeling so grateful and content the whole time because I had found my people. My Ohana. It was so easy to talk to everyone and to open up. It just felt like we all were already friends. The weekend went by quickly and definitely left us wanting more.”

Alongside her family, Courtney would attend an Education day for HDSA’s Northeast Ohio Chapter as she would be able to meet several young people and learn more about HD. She also attended the 34th HDSA Convention in Boston this year.

“I am excited to meet more people and hear their stories, to learn more about the new research studies,” said Courtney. “Being involved has significantly helped me come to terms with my dad’s diagnosis and what it means for my future.”

“I definitely still have bad days. I don’t think I will ever not have bad days. But I do know that I am not alone. That is one thing I want everyone in the HD community to know—you are NOT ALONE! We are one big family that has open arms and does not judge.”
Cody Collins has a message for the HD Community:

“Keep your loved ones close, stay positive, and have hope through everything. Never give up!”