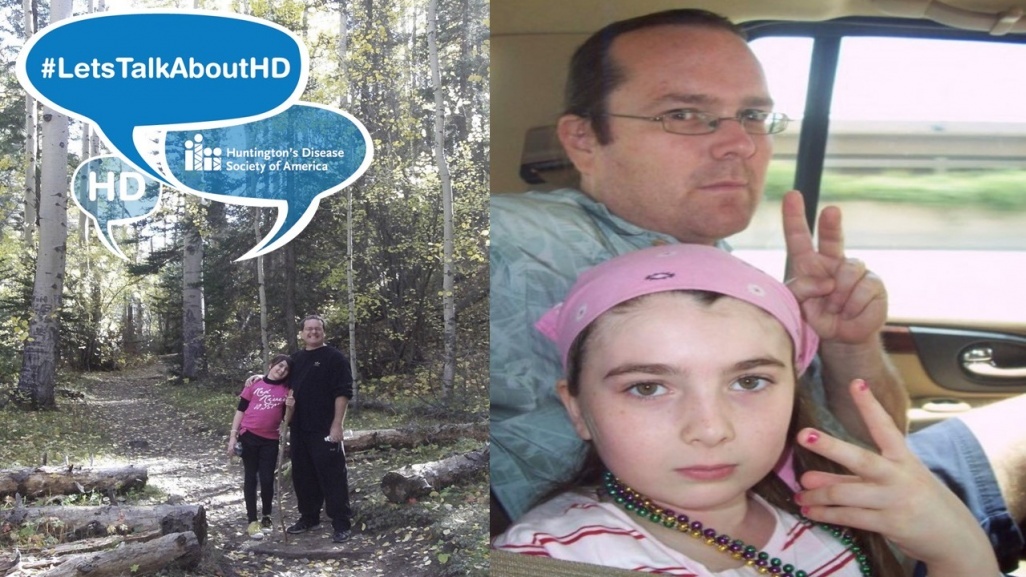 At only nineteen-years-old, Texas native Jessica King had to grow up quickly.

At twelve-years-old, her father was diagnosed with the gene that causes Huntington’s disease (HD).

“At first, I had no idea what it was and I kind of dismissed it because of my parent’s lack of knowledge on it and my age it didn’t seem like a big deal,” Jessica explains.

However, this was a very big deal that could alter her life.

Each child of a parent with HD has a 50/50 chance of inheriting the faulty gene that causes Huntington’s disease. Today, there are approximately 30,000 symptomatic Americans and more than 200,000 at-risk of inheriting the disease.

“I still remember the shock and fear I felt when I finally accepted the fact that this is an incurable disease and I have a 50% chance of having it,” said Jessica. “Being an only child, I felt so alone and felt like no one understood this confusion and anger I had about this. And things only went downhill from there.”

Jessica was only thirteen-years-old when she started smoking marijuana. According to Jessica, she used this as an outlet to run away from the fear that her parents’ arguments would never go away. Her main fear was that HD was tearing her family apart and nobody will ever be the same.

When she was fourteen-years-old, her parents got divorced.

“I was so confused, thinking how can my mom abandon my father like this? I didn’t understand that sometimes two people just are no longer happy together and they would be way happier apart and that was very true in this case.”

Her mother would still help her father anyway that she could. She helped get him into an assisted living home. With all this going on, Jessica was on a downward path as she developed complete resentment towards her mother.

“I thought everything was the fault of HD and her,” she explains. “I remember when my mom told me about Bill, my stepdad. I was furious. How could she do this to dad? I didn’t understand that my mother deserves to be just as happy as anyone and who was I to deprive her from that.”

Jessica’s drug use expanded to selling at fifteen-years-old.

“With all of my continuing anger and confusion about everything I started smoking weed more often and it slowly escalated into me selling and popping pills and drinking pretty heavily,” said Jessica. “As the years went on, my drug addiction quickly progressed and eventually smoked methamphetamine every day, homeless, with a total disregard for any one… even myself. I blamed HD for a lot of my problems. I was angry at God… saying why me?”

On February 12, 2018, Jessica was finally clean at the age of eighteen-years-old. She moved into Oxford House, sober living facility, in Dallas and would slowly rebuild her relationship with her family.

“My life was turned upside down,” said Jessica. “I finally felt accepted and listened to and related to. I was finally able to come to terms with the fact that my mom had nothing to do with how messed up my life was. This was all inevitable and I could either accept it or sit in my misery for the rest of my life.”

She would then learn more about the HD Community and started to meet more people like her.

“I had found my other family,” Jessica explains. “Words cannot express my emotions when I realized there are people that understand this whole other part of my life. While the recovery community is able to help me with this huge part of my identity, there was this whole other missing piece. I learned that I don’t have to walk through this journey alone and that HD does not define me or my family.”

A year after living in the sober house, Jessica returned home to live with her mother. It was strange at first but their relationship grew stronger each day. She would continue to visit her father because she never wanted him to be lonely.

“The guilt still follows me every day that I am not able to be his fulltime caretaker but that is just not something I can do,” Jessica explains. “I would do anything somedays to take his place and let him do all the things he wants to do. Like get a dog, ride a bike, drive a car, and go to concerts. At this point, I was the only one who would visit him because we had no other family here and my mom still helped him when she needed to, but this was something I had to do by myself.”

Jessica would continue to make progress in her life as she was offered to go back to Oxford House as an outreach worker. This involved her relocating to Lubbock, Texas and she struggled with this decision. Then, someone from the HD Community assisted with making her choice.

“I battled for a long time whether taking it was the best choice. After talking to a friend in the HD community, he helped me realize that my dad would feel worse if he knew I turned down my dream job for him and all my mother wants is for me to be happy. So, I was off to move six hours away from my family and start this new chapter in my life.”

For Jessica, it was hard leaving her father.

“It was hard giving this responsibility over to my mom,” Jessica explains. “I was afraid that she didn’t have the knowledge on how to handle someone with HD. But I had to sit back and trust God at that point. It is still a daily struggle everyday wondering what he is doing and what if something happens and I am not there, but I have to let that guilt I have go otherwise I can never keep moving on.”

As for testing for the disease, Jessica does not want to be tested for HD anytime soon. The decision to get genetically tested is difficult for people at-risk. Each year, 5-10% are tested. It is never the right or wrong decision to be tested. There are people that see no benefit in knowing that they will develop the disease while others want to know in order to make informed choices about their future.

Jessica has a message for the HD Community:

“HD has made me so much stronger, and sometimes it feels like I have had my childhood robbed from me, I have received so much more love and knowledge from it than I could ever imagine.”

“HD has affected my life in so many ways, but I can honestly say that I am a better person today because of it and I have met people that I wouldn’t trade for the world. I am stronger to because of HD.”