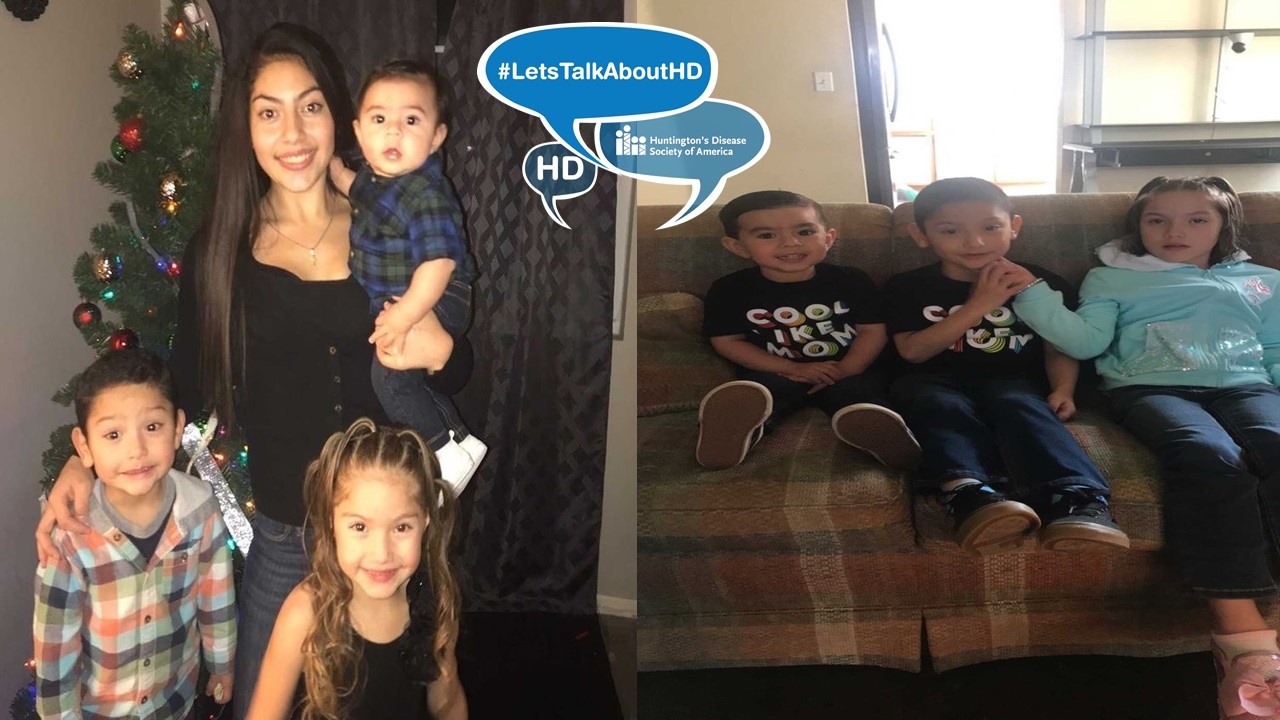 24-year-old Janelle Roybal is a single mother of three young children from California. Two of her three children are from one relationship and they are at risk of inheriting Huntington’s disease (HD).

In 2013, she met the future father of her two children. Over the years, she noticed that he had behavioral issues and trembling in his hands. Janelle did not think about this too much until his mother was diagnosed with Parkinson’s disease. However, the family was then notified that his mother was misdiagnosed and she tested positive for HD. The symptoms of HD are described as having ALS, Parkinson’s and Alzheimer’s – simultaneously. Symptoms include personality changes, mood swings, depression, forgetfulness, impaired judgement, unsteady gait, involuntary movements, slurred speech, difficulty in swallowing, and significant weight loss. His mother developed more symptoms including involuntary movements and pausing for a period of time.

Upon learning of this diagnosis, it was then communicated that he has a 50/50 chance of inheriting the faulty gene that causes HD. Although he found out he was at risk, he decided not to be tested. The couple’s first daughter started to have behavioral issues by the time she was 2-years-old. According to Janelle, she wanted her daughter to be tested for autism, but the behavioral issues and involuntary movement in her hands were ignored by her doctor due to her age.

Her daughter also had seizures which is one of the initial symptoms of Juvenile Onset HD (JHD), a progressive form of HD that affects children and teenagers. Janelle took her daughter to the emergency room, but the tests that the hospital ran came back normal.

At 4-years-old, Janelle’s daughter was in kindergarten when she started to have more changes in behavior and she had a difficult time concentrating in school. She would struggle to make friends and Janelle felt that she was treated different by the students and the teachers.

As her daughter’s grandmother’s symptoms of HD were progressing, Janelle did more research as very little information was given at first diagnosis. She then read about JHD and her daughter’s symptoms matched of someone diagnosed with the gene that causes JHD.

According to Janelle, because of her daughter’s age, it was a battle to get her tested for HD. Janelle took her to the hospital when she started to experience clumsiness, choking on food, and constant crying.

Her daughter took a blood test in January of 2021 and in March Janelle’s daughter tested positive for JHD. This was tough news for Janelle to absorb as she expressed a lot of emotion but had her daughter to comfort her.

“As a mother, it is not wrong to think the worst,” said Janelle. “Right now, it is a stressful time.”

Janelle wants to spread more awareness against JHD as she feels not enough people knowing about it and wants to use social media to her advantage. Janelle has a message for the HD Community:

“Stay positive and you are not alone in this fight against HD. Reaching out to people helps and do not give up or blame yourself. Do your best to distract yourself. Spread awareness and advocate for those with HD. Nobody fights alone.”